The quirks of Livery Company Coats of Arms

December 04, 2020
One of the most popular of the lectures I deliver for the Arts Society is that on the Heraldry of the City of London and its Livery Companies. When I offered to repeat the lecture for the Heraldry Society in the summer of 2020 it resulted in over 500 enrolments and a sorry looking wait list! Clearly there is substantial interest in the topic - not least because of it's strong visual appeal.
Aside from the immense amount and variety of visual material this topic provides, it is also evergreen as the Livery Companies continue to return to the College of Arms in order to make additions to their armorial achievements or engage the services of heraldic artists to depict their arms in new and innovative ways. Meanwhile new Guilds and Companies without Livery periodically embark on the process of petitioning for arms thereby adding to the emblazoned panoply of corporate arms in the Square Mile.
During my exploration of this topic I have discovered an array of heraldic quirks and foibles that are, I think, quite unique to the City of London. In some cases the origins of these oddities are known, in others they remain a mystery despite the proximity of the College of Arms and its Herald who have been located in the Square Mile since the middle of the 16th century.
In 2019 I commissioned a poster of the Arms of the Livery Companies and the Companies without Livery thinking there would be little change until one of the various Companies without Livery progressed to full Livery company status. What I never imagined is that two Livery Companies would go on to make amendments to their existing armorial bearings in 2020. I've since updated the poster to reflect the two important changes.
The most recent livery company to petition for supporters is the Worshipful Company of Fletchers, granted in June 2020. The petition for supporters was initiated as a result of the Company petitioning the Crown for a Royal Charter - itself an exceptional act for such an ancient Company.
Hitherto the company had no grant of supporters but employed two rather curious looking demi-characters plonked into ornate plant pots in lieu of an official grant - these are not in fact supporters since they are not holding the shield, hence offering no 'support'.
While the new grant is mentioned in the College of Arms newsletter of October 2020 and while it makes no visual appearance therein and rather annoyingly the blazon isn't reported either - my spies and informants have helped me source an image of the supporters which shows little change from those used by the Company without lawful grant up to June 2020.

The City of London Freeman's Guide is the definitive concise guide to the City of London and its ancient and modern Livery Companies, their customs, traditions, officers, events and landmarks. Available in full colour hardback and eBook formats and now in its fifth or Platinum Jubilee edition. The guide is available online from Apple (as an eBook), Amazon (in hardback or eBook) Payhip (in ePub format) or Etsy (in hardback or hardback with the author's seal attached). Also available from all major City of London tourist outlets and bookstores. Bulk purchase enquiries are welcome from Livery Companies, Guilds, Ward Clubs and other City institutions and businesses. 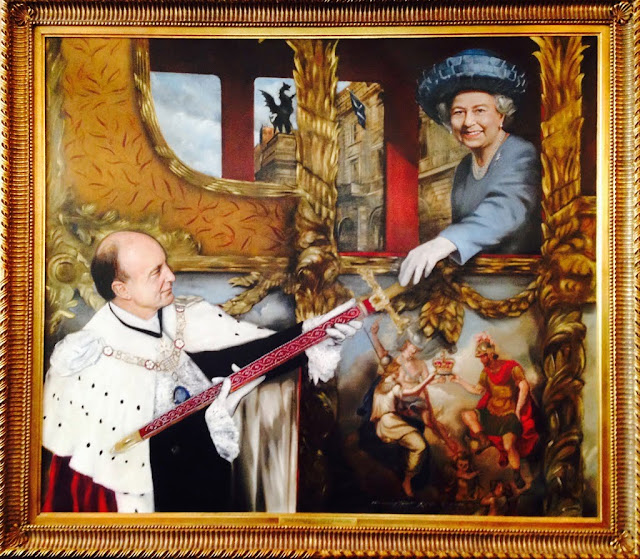 Of all the myth and lore that envelopes the Square Mile perhaps none is more persistent than the idea that the Monarch has to ask to enter the City of London and may not do so without the permission of the Lord Mayor.  While it is true to say that the City's relationship with the Crown is complex and exceptionally ancient, the myth that the Monarch is in some way subordinate to the Lord Mayor is simply nonsense. The very fact that the Lord Mayor has to be approved by the Monarch at a ceremony that takes place in the House of Lords, and later makes an oath of allegiance to the Monarch at the Royal Courts of Justice during the annual Lord Mayor's Show should put paid to this myth, yet it continues to spread. The genesis of this myth is likely to be the Ceremony of the Pearl Sword which has, from time to time, been held at the former site of Temple Bar on Fleet Street. During the ceremony the Monarch's carriage procession draws up, the City Police pull a red cord across the
Read more

A Masonic Temple set up in a Livery Hall in the City of London This blog article is based upon an earlier comparison of the similarities and differences that exist between the Livery Companies and Freemasonry which previously appeared on my website (www.cityandlivery.co.uk) in 2016. This article has been updated several times following further discoveries and a deeper understanding of the role of Freemasonry and how its relationship with the Livery came about. Two organisations separated by a common ethos? To the casual observer it may appear that the City of London  Livery Companies  are a branch or offshoot of Freemasonry as they have a passion for dressing up in unusual outfits, for participating in arcane ceremonies and they use similar titles for many of their officers, to wit: Master, Past Master, Warden, Steward, Almoner, Chaplain, etc. However some of these titles are also used by many other organisations including the ancient universities. They are reflective of the s
Read more

The City of London has many civic and ceremonial officers that are unknown to the civic apparatus of other towns and cities throughout the United Kingdom. Ancient offices such as that of the Ale Conners, the Bridge Masters, the Chief Commoner, the Clerk to the Chamberlain's Court, and the Secondary and Undersheriff are just a few among the panoply of sceptre, mace and sword bearing custodians of the City's traditions. The Beadle is the one office holder which is common to both the City of London and to its many Livery Companies, yet in typical City style the role is not the same in every Company and certainly not between the Companies and the City. Such is the way of the City that delights in creating myriad exceptions to, and variations on, a common theme! The role of Beadle probably grew out of the ecclesiastical role of Verger, and to this day the Verger of St Paul's Cathedral wears a gown which is of the same design as that employed by Livery Company Beadles. Note:
Read more