Showing posts from November, 2019
Show All

Vote for Vellum! The 'roll' [sic] of parchment and vellum in preserving history and heritage 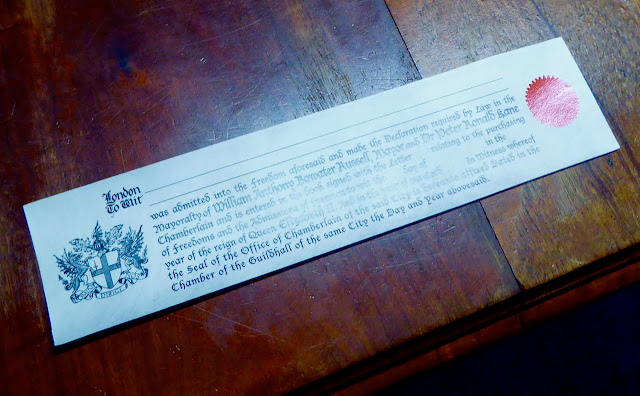 Every Freeman of the City of London receives a small certificate as the physical token of admission into the Freedom. In times past this document was carried in a wooden tube and had to be available for inspection, something akin to a license to trade. Most Freemen choose to have their Copy of Freedom (as it is described) framed by the Chamberlain's Court before they leave Guildhall. Because of this the Freemen rarely, if ever, handle the document to feel its texture, perhaps they assume it's just a piece of paper. A copy of Freedom of the City of London, ready for the final calligraphy work by the Chamberlain's Court in the City of London. This one prepared for a Freedom admission during the year of the 692nd Lord Mayor of London, William Russell Every Copy of Freedom is written on fine quality parchment rather than paper. The parchment is made from the skin of a sheep and is produced in the UK by William Cowley  of Newport Pagnell, Buckinghamshire (a f
Post a Comment
Read more
More posts